Our 4 D-Day veterans are pleased and honoured to be invited to join the people of Guernsey in commemoration and celebration of the Island’s Liberation in May 1945.

The veterans are yesterday’s young people. When they were 20, our 97 year old veterans stormed the beaches and landing grounds of Hitler’s Fortress Europe. Although D-Day necessarily by-passed the Channel Islands, effectively severing supply line links with mainland France, the liberation of Europe had begun.

For those involved in supporting our elderly veterans to make this journey, it is a privilege to be part of this historic weekend as the people of Guernsey pay tribute to surviving veterans, and to islanders who endured those days of occupation.

A Normandy Veteran from Bridgend in South Wales has been reminiscing about his Royal Marines World War Two service on D Day and his part in the Liberation of the Guernsey, 77 years ago.

Joe Corless, 94, grew up in Devon and joined the Royal Marines in 1943, having told the recruiting sergeant he was of age, when in fact he was only 16 at the time. He and his school friend had cycled to Plymouth from their home in Torquay and within a few months were undergoing military training at what is now the Commando Training Centre at Lympstone, near Exmouth.

“The Camp at the time was the main Training Depot for the Royal Marines and after passing out I was sent to join a Royal Marines Beach Battalion,” said Joe. “We moved all over the country, doing a lot of training in the Welsh Black Mountains as well, before I qualified as a Landing Craft Coxswain.

Joe’s Flotilla operated around Normandy and the D Day beaches for quite a while before eventually returned to Calstock near Plymouth, where his Landing Craft were fitted out and repaired. He was looking forward to VE Day, which they knew was coming, and a celebration, something they had not done in long time.

“But we were all told to pack our Kitbags and get ready to Liberate the Channel Islands. We crossed the Channel once again and on 9th May I was heading in to the Harbour at St Peter Port on Guernsey, ready to drop off a naval team who would set up the British Headquarters in the town. It all went smoothly for us, because the Germans had signed the surrender on a destroyer in the Harbour earlier in the day.”

“I remember how pleased the Islanders were to see us. They were so enormously happy and relieved. There was no fighting and it seemed very peaceful, it was a very friendly welcome as I recall.”

Over the next six weeks Joe and his Landing Craft helped out where they could; ferrying supplies and food from the ships in the Harbour and the large Red Cross ship that had been on hand for everyone. He also was used to move the large amount of German soldiers who were laying down their arms and ammunition. They were taken out to prison ships which would take eventually take them on to prisoner of war  camps in Le Harve in France and back in England.

“The Germans were friendly as well, they were equally relieved not to have fought it out and had been there for nearly five years, so they got to know a lot of the Channel Islanders. We had one moment where we were heading across Guernsey to get to the south side of the island, as we were walking along we saw a group of about 40 fully armed German soldiers coming toward us.

Our corporal in charge quickly got us to dodge into a churchyard as they passed by. Moments later their officer came along on a cycle, and dropped some papers from under his arm. We picked them up for him and he ask us in English if we’d read the German letter. None of us did, so he explained that it is the surrender order, which he was going to read out to his men who were heading down to the Quay. It was a lucky encounter.”

Joe has never forgot how nice the people of Guernsey were after their five years of occupation and one of his friends had special thanks to one family who they encountered.

“We got on well with the Guernsey people, in fact my mate Jim got friendly with one of the girls and her family invited him to their home. He would go there for meals and everything, and for a few years after her parents would send Jim crates of Guernsey tomatoes to give to his mother, they were so friendly and pleasant.”

“Time spent with Joe Corless is always a humbling experience.  I have been privileged to hear personally from Joe his understated account of courage and service from the Normandy beaches on D Day to the Liberation of the Channel Islands.

“Although we cannot be with Joe today in Guernsey as planned, we will all have Joe’s remarkable story in mind as we reflect together on the freedom won through the sacrifice of his generation.  Joe and fellow veterans – we salute you.“

Joe served for five years from 1941. At Normandy he was a Bombardier in the 86th Field Regiment RA of the Hertfordshire Yeomanry, initially involved in the action at Ver sur Mer.  During the D-Day Revisited pilgrimage to Normandy in June 2016 as the veterans’ group travelled through the ‘bocage’ region, Joe gave a talk about his experiences through the Normandy break-out.

As the coach passed through the countryside now so peaceful, Joe pointed out landmarks which were clearly so meaningful to him, explaining how soldiers of the regiment fought their way across the heavily defended terrain.

Although this talk was impromptu and obviously unprepared, Joe’s words were distinctly moving, and many commented that in some ways it was a real highlight of the trip. Joe hasbeen a stalwart supporter of the British Normandy Memorial which was finally opened in June 2021. 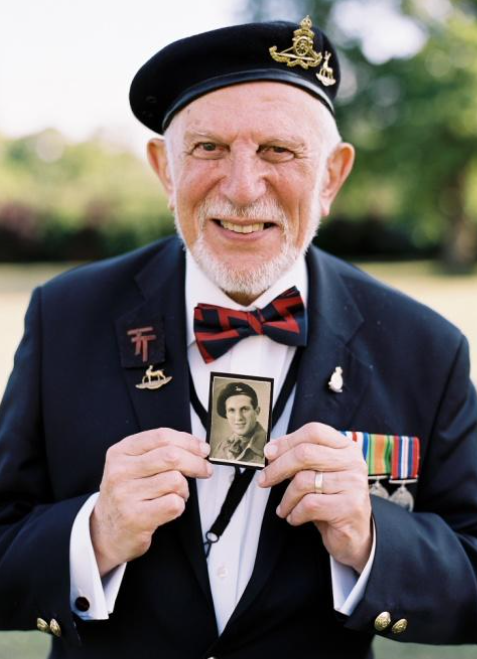 Bob served from 1943 to 1947 in the 9th Kings Regiment, 5th A Battery South Staffordshire Regiment and the 11th Royal Scots Fusiliers.

Bob landed after D-Day and was part of the advance towards Caen and later through the Bocage region. Part of the ‘D-Day Revisited’ group in June 2017, Bob was one of three veterans of the 59th South Staffs visiting the Chateau de la Londe in Epron. Invited by the châtelaine, Mme. Alix Casel, walking through the grounds to the rear of the chateau brought back clear memories of the assault which was carried out on 27th/28th June 1944 as part of Operation Mitten. Bob was able to locate the boundary wall which he climbed over during final stages of the battle as the enemy garrison was overcome by the attacking soldiers.

The division then fought their way inland and was
engaged in the tough fighting to liberate the town of Thury Harcourt. Heavy casualties up to 90% led to disbandment of the Division and Bob’s subsequent transfer to the Royal Scots. As the advance east progressed, Bob was made up to sergeant and spent Christmas of 1944 in Nijmegen. 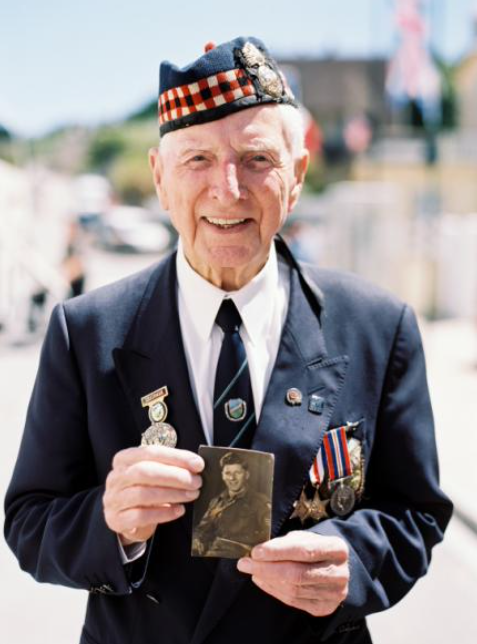 After volunteering under-age, John’s wartime efforts began with crossing the Atlantic in December 1942 on the Cunard Liner, Queen Elizabeth. As a Royal Navy gunner, John later took part in every major beach

assault of the War. Joining LST-322 from the builder’s yard in Philadelphia, John and the crew crossed the Atlantic directly to Algeria in support of the advance after the ‘Torch’ landings; then followed involvement in the relief of Malta and action in Tunisia.

Next it was ‘Operation Husky’, the landings on Sicily, followed by opposed landings at Salerno and Anzio in Italy. With LSTs in urgent demand for the Second Front assault,John came back to Liverpool on LST-322 for quick dry dock repair, then straight down to Portsmouth. Crossing with the massed fleet of ships in the early hours of 6th June (D-Day) John took part in the initial dawn assault on Sword Beach, offloading tanks and trucks. Over the next few weeks John made 13 crossings to Sword and Gold beaches.

Each outward crossing was fully loaded, after which returns to Portsmouth carried prisoners and wounded who were treated in the on-board hospital facility.

Attention is drawn to www.d-dayrevisited.co.uk under ‘Veterans Stories’. 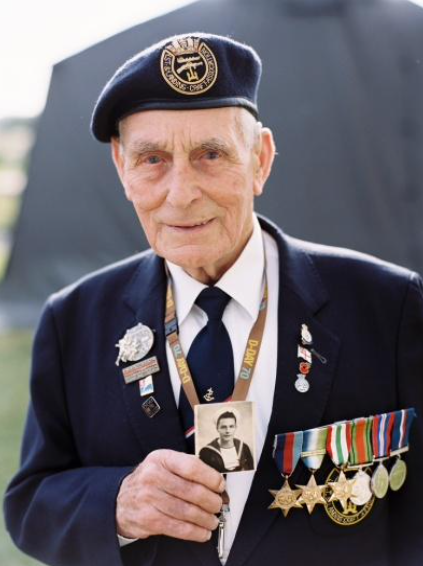 Jack joined the Home Guard at the age of 16, volunteerring for the Royal Marines the following year in 1942. Initially based at Chatham, Jack served on HMS Royal Soveriegn on convoy duty, then transferred to ‘Amphibious’. Training was carried out at Inverness and Achnacarry Castle in Scotland (Castle Commando), followed by practice beach landings in Devon and finally being based for a long period in Poole.

For D-Day, Jack departed Southampton on 4th June, then lowered boats at 1155 on 5th, offshore Gold Beach. With a group of frogmen, the task was to set explosives on the steel framed under-water defences about 1⁄4 mile offshore. Once complete, they landed on Gold to await the right moment. When HMS Belfast opened bombardment at 0615, the sergeant triggered explosive charges and the defences were breached for the imminent assault by the Yorkshires & Green Howards.

Jack was awarded the Croix de Guerre with silver star by the French Government and has a Mention in Despatches. He remained in the beaches area to clean up defences in support of the advance.

Jack was later withdrawn and sent to the Channel Islands, mainly Guernsey, where his team was tasked to clean up military defences and take prisoners. Jack landed into St Peter Port on the early morning of 9th May and remembers well that German soldiers were willing to surrender, mostly starving as were the islanders themselves. With a wry smile, Jack even recalls tasting the Potato Peel Pie! On arrival; the crew distributed loaves of bread and were treated to fresh Guernsey crab in exchange. There was an intense search for SS, and Jack was deployed to Sark and Jersey to be part of the challenge of disarming and demilitarising.

Jack went into the Reserves in 1947 and remained on the active list through to 1957. 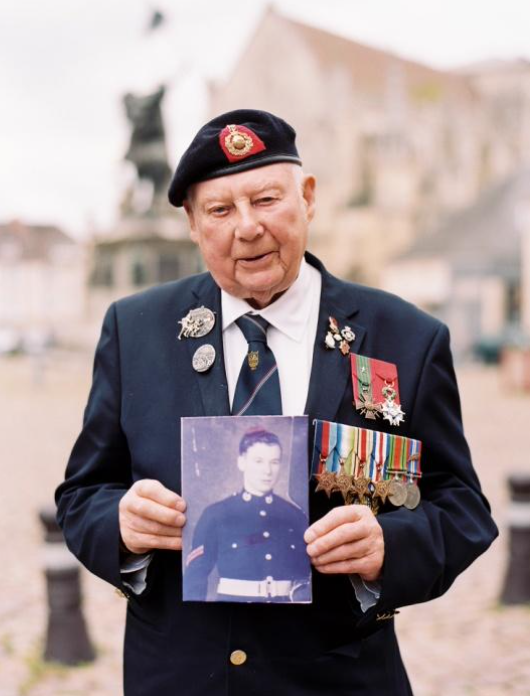